Boil Banov: The truth is not important for BSP, but this assembled fake news to be repeated

The truth is not important for BSP, but this assembled fake news to be repeated. This was written by Minister of Culture Boil Banov in his Facebook account in connection with the audio tape by Elena Yoncheva MP, by which the left accused the Minister of Culture, Boil Banov, of damaging the country by about  700,000 levs. 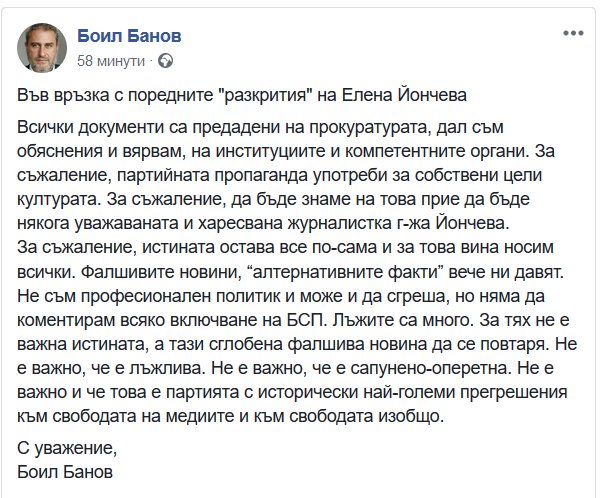 “All the documents were handed over to the prosecutor’s office, I gave explanations and I trust the institutions and the competent authorities. Unfortunately, the party propaganda uses culture for its own purposes. Unfortunately, to be a flag of this, she accepted to be once the respected and liked journalist Ms. Yoncheva,” Banov writes.

“Unfortunately, the truth remains more and more alone, and we are all responsible for it. False news, alternative facts are already giving us away. I am not a professional politician, and I may be wrong, but I will not comment on any inclusion of the BSP.” There is a lot of lies, no truth is important to them, and this assembled fake news is repeated, it is not important that it is false. It is also not important that this is the party with historically the greatest transgressions of freedom of the media and of freedom in general,” the minister of culture writes.
Екип INFORMO
Sunday February 3rd, 2019 01:45 PM Sunday February 3rd, 2019 23:43
Bulgaria, Social Networks аудио записБоил БановБСПистинапрокуратурафалшива новинафейсбук
0 Comments
Share Follow